"I felt like I was a real researcher in a lab. The whole experience only reemphasized to me that [scientific research] was, without a doubt, what I wanted to do in the future." 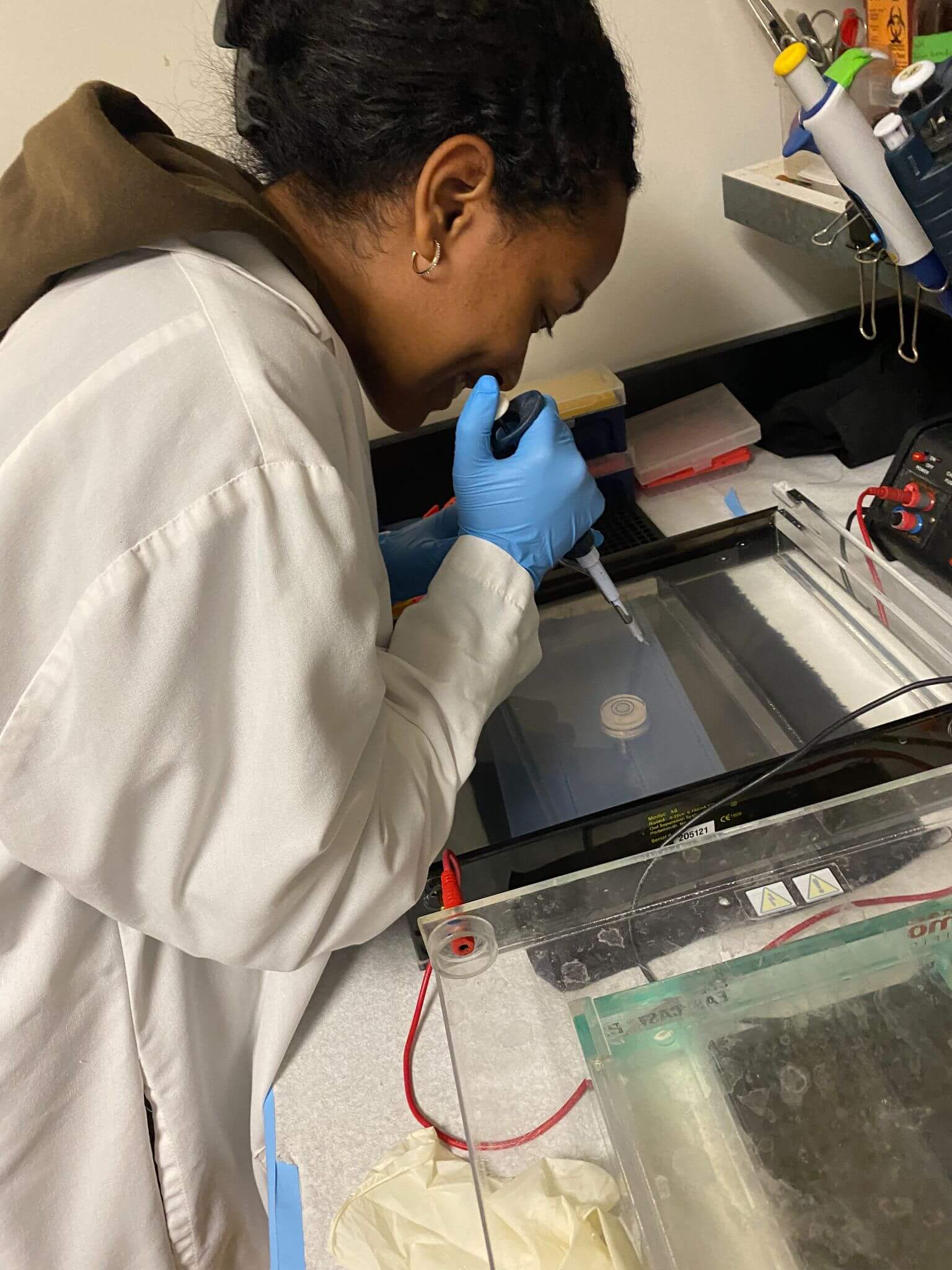 This year has been a particularly memorable one for Hannah Menghis, who spent the spring before her freshman year at Brown University doing biological research at Stanford University. Menghis was no stranger to the research lab, having interned the past 3 years for ABE through the Carnegie Academy for Science Education (CASE) in Washington, DC. She says she has two takeaways that have culminated from her hands-on research experiences: the tangible lab skills she acquired and “the overall experience of being a Black girl in STEM.”

“I think there's a general feeling as a Black girl in STEM that you have to work twice as hard to prove that you are worthy and fully capable of doing the same work as everybody else,” Menghis says. “I have accepted that I don't need to constantly prove myself to others because my work will do that for me.”

Menghis has a large body of work behind her already before even starting her biology major at Brown. Her journey started as a child visiting local science museums in the DC area with her mom, such as the Smithsonian National Museum of Natural History.

“I would always get super excited when they would do live demonstrations because they were always so engaging to the audience in a way that I hadn't really experienced before in my elementary school setting,” she says. “There were always people willing to explain what things were and how they worked, which I think later instilled in me this constant curiosity that's always yearning to learn more about all the hows and whys.”

Menghis’s research career really kicked into high gear in the summer of 2019, when she participated in a YWCA-sponsored week-long biotech camp at CASE. There, she first learned to use a micropipette and do techniques like gel electrophoresis. She also met Marlena Jones, director at CASE and of ABE-DC, who invited Menghis to apply for an internship.

“During that summer, there were a lot of people who became interested in biotechnology through the workshop, but there was one particular student who was very interested in working with us in the next school year, and that was Hannah,” Jones says. “She was going into 10th grade, which is young for us to have as an intern, but she was very persistent.”

In addition to working with the ABE kits after school as a CASE intern, Menghis would also get lab experience directly through the ABE curriculum in her science class at BASIS DC Charter School that school year. “When I first participated in ABE, I remember feeling a certain kind of excitement about finally being able to do real hands-on lab work,” she says. “I felt like I was a real researcher in a lab. The whole experience only reemphasized to me that this was, without a doubt, what I wanted to do in the future.”

Although her work as an intern then stopped the following year due to the COVID-19 pandemic, Menghis resumed her internship the summer of 2021, helping CASE relocate their labs, as well as helping with ABE into 2022. For her senior project, Menghis originally wanted to go to Eritrea, where her family is from, to research the native language there, Tigrinya. But she ultimately went in a different direction, asking Jones whether she could instead do research at a different Carnegie Science facility.

“I made the connection between Hannah and people at Carnegie's West Coast departments, Plant Biology and Global Ecology,” Jones explains. “Several research scientists wanted her to work with them.”

Drawn to the topic of algal resistance to climate change, Menghis worked in the lab of Adrien Burlacot at Stanford. “I thought it was really cool how they were using CRISPR to make microalgal mutants in order to better understand their mechanisms of photosynthesis that can help fight climate change,” Menghis says.

After the success of Menghis’s research internship, Jones is now working on future opportunities for the students who work with her on the ABE program at CASE. For example, this past summer, Jones sent two of her college-level research assistants to California to look at the ongoing research projects at Stanford. “The hope is that next summer, or during the school year, they would be interested in doing research there,” she says. That experience, along with Menghis’s, was made possible by Carnegie Science grants to advance diversity, equity, and inclusion.

“I'm incredibly grateful for all the support CASE and ABE have given me in helping me reach my dreams,” Menghis says. “Both of these organizations are great resources to tap into; you never know what amazing, unexpected even, opportunities might come out of it!”