Raul Lazaro:
From Humble Beginnings to a Biotech Lab

There's a place for everyone in biotechnology. You don't have to work in a lab like me. You can do statistics, manage the facilities, work in manufacturing, law, or management… There are lots of different roles out there that I never knew about before.

Some mornings, Raul Lazaro wakes up and cannot even believe where he is. Working in a lab at Amgen on preclinical studies is not somewhere he ever imagined he would be. Lazaro grew up in Ventura, CA, where his parents worked as strawberry pickers as part of the Bracero Program, which allowed migrant workers from Mexico to work in the United States. He is now on a mission to show others that science is possible for them, no matter their origins.

“I'm the only person in my family, including my six siblings, and in my extended family to have a career in science,” says Lazaro, whose parents ultimately started their own business. “I used to be ashamed of what my parents did when I was younger, but now I own it as my heritage. I think it's important to talk to young people and let them know that somebody who looks like you made it and that you can, too.”

Lazaro remembers always being interested in two subjects: science and art. He would fuel his scientific interests through Discovery Channel programs on television and then was fortunate to have science teachers in high school whom he liked. “Science was like a puzzle for me,” he recalls, “trying to figure out how and why something works.”

After high school, Lazaro took some time to explore both his artistic and scientific interests, ultimately getting an associate’s degree in liberal arts at Ventura College. He sees a real synergy between art and science, viewing experiments as a creative endeavor.

After college, Lazaro took a job as a contractor at a lab. His time there was short, marred by what he called a toxic environment with racial undertones—experiencing everything from being mistaken as the janitor to being directly told he did not belong in the lab. While he started there feeling excited to have a foot in the door to advance, he left feeling discouraged.

Lazaro moved to Los Angeles, where he found a more diverse community and decided to try out lab work again. “That’s where my career actually started,” he said.

Working at a research center at the University of Southern California, Lazaro gained expertise in in vivo studies, the preclinical research that occurs in animals before new drugs are tested in people in clinical trials. He remembers finding a supportive community of mentors in the lab, which included many immigrants from Asian countries. “They all really embraced me,” he says. “And the lab’s principal investigator gave me the confidence I needed to succeed.”

Lazaro would work in that lab for almost a decade, and through that experience would get to his current role at Amgen as a senior associate working on in vivo studies. He started work at Amgen as a contractor but was able to advance after a couple of years. Lazaro loves knowing that the work he does could ultimately lead to a drug that could improve someone's life. “I also love working with my hands and moving around,” he says. “I am not really a desk job person.”

Lazaro also says he loves the nature of research, how the team is always working to explore new questions. “Like today, we're going to try this different assay,” he says. “We've been working on it for 2 weeks. We wrote the protocol for reagents, researched it, and we're going to try it out today and tomorrow. We don't know if it will work, but fingers crossed!” Failure, he says, is just part of the process.

Now volunteering to speak to ABE students, Lazaro wants to communicate that while the traditional path is not necessary to achieve a career in science like him, he wishes he had taken a more traditional path, including a 4-year degree. “Get some experience in academia for a couple of years; learn what you want, and then come into industry and you can buy your mama a house,” he says.

Lazaro also wants students to know that “there's a place for everyone in biotechnology,” he says. “You don't have to work in a lab like me. You can do statistics, manage the facilities, work in manufacturing,  law, or management. … There are lots of different roles out there that I never knew about before.” 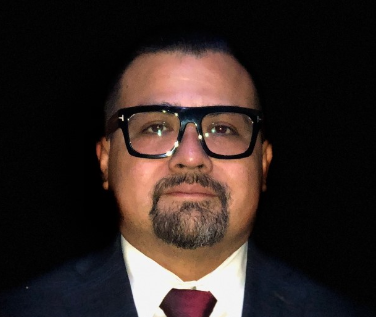