Any global education effort must be universal enough to teach students the core skills and knowledge in demand around the world, while also being specific to the environment in which they are being taught. With sites in 10 countries globally, the Amgen Biotech Experience (ABE) strives for both this universality and localization across the program. Those dual goals were on full display this past summer at regional meetings in Asia, Europe, and North America.

“Even though all ABE sites have the same set of experiments that they offer, every site implements the program slightly differently based on the culture and school situation,” says Charissa Lin, program manager for ABE Singapore. Indeed, says Alain Bessis, director of ABE France: “It was a big surprise to realize that not all of us do the same labs across the European sites.”

Site directors were able to compare notes in order to improve best practices at the regional meetings held in Hong Kong; Toronto, Canada; and Delft, the Netherlands. “The goal was for us to meet, get to know each other, and learn how the other sites are organized and how we run the ABE program. I think that the goal was achieved,” Bessis says of the Netherlands meeting, which took place in April and brought together the six European sites. 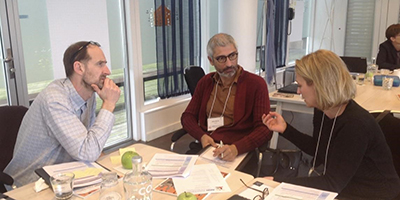 Already, Bessis and his team in France have implemented changes based on the knowledge exchange that occurred at the European meeting. They learned from colleagues at the ABE United Kingdom program that ABE UK organized a professional development institute specifically for lab technicians at schools. That training seemed so valuable that Bessis took the idea back to France, and they set up this training in July. “Thanks to this training, the lab technicians now feel more involved in the ABE program,” he says.

For the North America regional meeting in Toronto, program coordinators also enjoyed learning about various unique aspects of the 10 different sites. For Marlena Jones, director of the ABE program in Washington, DC, it was an opportunity to share the success, for example, of a summer workshop where the program trained 100 female middle and high school students at the Carnegie Academy for Science Education, as well as the need for ongoing support for getting multiple teachers trained with ABE at a single school. “By sharing such practices, the sites can continue to grow and evolve their capacities,” she says. 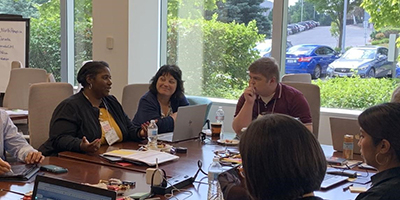 “The meeting gave us time for critical cross collaboration, so we could ask each other about challenges and how to overcome them,” Jones says. “I think we all came out of it feeling more invigorated and excited about the program as a whole.” She is now following up on several ideas to help bring ABE to more teachers in the DC area.

At the Hong Kong meeting, which also included the ABE sites from Singapore and Australia, one of the key topics of discussion was scalability, not just in terms of scaling the program up to more students or schools but also other ways to scale up—by going more in-depth or by having a shift in focus or sustainability, Lin says. By having face-to-face interactions in a “cozy setting,” the site staff had time to really learn about each site and to think about ways to further grow their programs, she says. 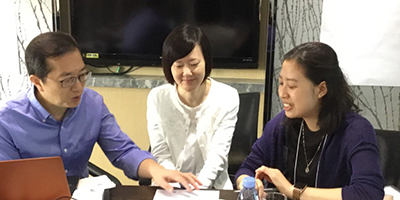 At the end of the day, the meetings in each region sought to strengthen the ABE community of practice, while accelerating program development and innovation in response to regional trends in bioscience to improve access and outcomes for all ABE students. Jones emphasizes that there remains a high need for quality science education throughout the world, and she hopes that efforts in DC and elsewhere will help bolster efforts everywhere in training the next generation of scientists.