Analyzing Our Genes to Pinpoint Disease

You may never have heard of her, but Dr. Mary-Claire King is a significant name when it comes to the study of genetics. King was born in 1946 in Illinois (USA). The loss of her childhood best friend from cancer when King was spurred her into a career in science. King’s goal was to help prevent and treat cancer. While many would have pursued careers in medicine, King chose to study genetics, specifically seeking to uncover a genetic marker for breast cancer. At that time, many believed that cancer was caused by viruses, and King’s work was often dismissed or even attacked. However, beginning in 1974 and extending through 1990, King painstakingly evaluated over 170 possible genetic markers for breast cancer using the technique of linkage analysis.

Linkage analysis is used to map genes (determine the spatial arrangement of genes on a chromosome). Gene linkage is based on the events of meiosis in which alleles independently assort (the allele received for one gene doesn’t affect the allele of another gene). Alleles for linked genes tend to segregate together during meiosis, unless they have been separated by crossing over during meiosis. Crossing over is one method of introducing genetic variation; homologous chromosomes exchange pieces of genetic material in meiosis I. The closer together two genes are on a chromosome, the less likely their alleles will be separated by the crossing-over process. Gene linkage is the most common exception to Gregor Mendel's Law of Independent Assortment.

We can use the frequency of recombination to estimate how far apart genes are. Linkage analysis explores the genetics within a multigenerational family tree to determine whether a disease is genetic or non-genetic. King convinced the U.S. National Cancer Institute—which was conducting a large study of the effects of birth control pills in the development of breast, ovarian, and uterine cancer—to add questions about family history. King then used the family history data to create mathematical models to search for a variable that could explain the patterns of inheritance of breast cancer. Her models strongly suggested that heritable breast cancer was a result of an autosomal dominant pattern of inheritance in which one copy of the disease-causing allele results in the development of the disease.

With the advent of fast and easy gene sequencing technologies, finding genes that are linked to disease has become much easier and quicker. Genome-wide association studies (GWAS) allow scientists to use the sequences from a large sample of people with and without a disease to pinpoint disease-causing genes. In these studies, researchers identify a large number of people who have a disease and a large group of similar people who do not. They then collect DNA samples from all of the individuals and scan them using powerful computers. The computers scan the DNA sequences for selected single nucleotide polymorphisms (SNPs; differences in a single nucleotide in a strand of DNA).

Because of the large volume of data, researchers can determine if certain genetic variations are significantly more frequent in people with the disease as compared to people without the disease. Of course, these studies only suggest an association of particular variants with a disease—they cannot determine causality. Further research is necessary to determine what proteins the identified genes code for and how those proteins are involved (or not) with the disease process. 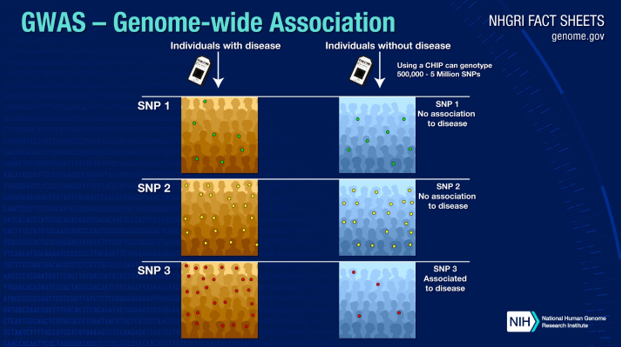 GWAS studies helped confirm the role of the breast cancer genes BRCA1 and BRCA2 in the development of breast cancer, affirming King’s work and cementing her legacy as a pioneer of genetic research into the causes of human disease. These studies are and will continue to be used to explore the genetics associated with human disease. To learn more about how GWAS is changing the future of human health, explore the following studies in which researchers are using GWAS to pinpoint the genetic basis of severe COVID infection, post-traumatic stress disorder (PTSD), and melanoma, to name a few.

Ask students to research and then discuss the following: