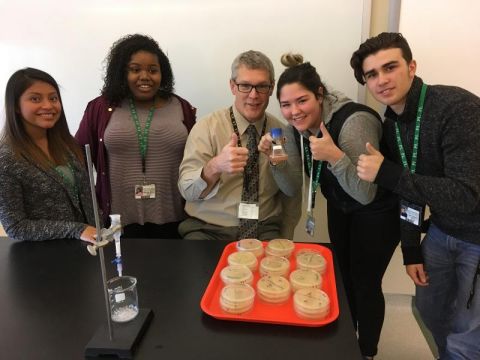 Over the last 6 years, a biotech revolution has occurred at Greater New Bedford Regional Vocational Technical High School in Massachusetts. Driven by biology teacher Scott Atkinson and supported through the Amgen Biotech Experience (ABE), the biotech program has gone from nonexistent to thriving in a remarkably short period of time.

“Our biotech program has been so popular we are now turning kids away,” says Atkinson. “Originally, I only had one class a day and now I have eight sections of biotech and it’s all I do; my job is now full-time as an ABE teacher.”

The biotech program at New Bedford has created personal transformations for both Atkinson as a teacher as well as his students, several of whom are now graduating from college with degrees in biological science.

As a vocational school, New Bedford works on six-day cycles, where students alternate between “shops”—which can vary from web design and electrical engineering to nursing and dentistry—and a more traditional curriculum, which includes the biotech elective class. The school is located in a socio-economically disadvantaged area, where Atkinson’s class is often students’ first introduction to the field of biotechnology. “Especially in our area, a lot of kids come in not realizing biotech exists, let alone is a career option,” he explains.

For Jessica Costa, who took Atkinson’s class 5 years ago, the ABE labs were pivotal to her decision to pursue medical laboratory sciences at the University of Massachusetts, Dartmouth, where she is graduating this year. “Coming from a vocational school, you're pretty much conditioned to think that once you graduate you'll head off into your trade, but Mr. Atkinson's class made me realize that my skills can go beyond my trade,” Costa

“Mr. Atkinson's biotech class was truly the best class I've ever had; it even tops some of my college classes,” she says. “He made it engaging for the students, and you could tell how passionate he is about what he does. Unlike other high school science classes, there are many hands-on lab procedures.”

What has enabled Atkinson to build such a robust program in biotechnology is the equipment and support from ABE. “We wouldn’t have biotech—and the finances to put this many kids through all the labs—without ABE,” Atkinson says.

Atkinson is also grateful to the ABE program for its professional development, which has allowed him to connect with like-minded, motivated teachers. While Atkinson has a master’s degree in biology and worked for many years in various molecular genetics lab, teaching has been a second career for him. Building a network with other teachers has helped him grow tremendously, he says.

“I have learned so much, like how to purify a protein with 30 students,” he says. Atkinson now teaches 216 students with a variety of ABE labs. One of the biggest recent changes he has implemented for the program has been the addition of honors and college prep courses.

Atkinson also has worked on several extensions to the ABE labs, including introducing students to the “technology side” of biotech. Before starting students on the mini PCR lab, he teaches them about the underlying programming, including the history of the thermocycler, from a water bath all the way up to modern, high-end PCR.  Using Arduino microprocessors, he works with students to write code and make models of mini thermocyclers themselves.

Many students come out of the class buying their own Arduinos, he says. “Some of these students may not have been enamored with the biological aspects of the labs but they were thrilled with programming side.”

Costa recently returned to New Bedford and visited Atkinson’s class. “I was blown away by all the equipment and instruments the students are using now,” she says. “It was incredible to see what the students are capable of doing now; they're practically college-level science majors! Coming from the very first biotech class taught by Mr. Atkinson, I can honestly say that the program has come a long way and is continuously thriving.”