The year 2018 was a big one in biotechnology. Among many new discoveries and advancements, immunotherapy took center stage with the awarding of the Nobel Prize in Medicine to immunologists James Allison of the MD Anderson Cancer Center at the University of Texas in Houston and Tasuku Honjo of Kyoto University in Japan. While their discoveries have led to innovative new therapies for cancer, they started with fundamental research in the lab.

Allison “has always stressed that his work was focused on uncovering basic mechanisms governing how the immune system works,” says Jackson Egen, senior scientist at Amgen (shown in photo above) who worked in Allison’s lab at the University of California, Berkeley as a PhD student. Both Allison’s and Honjo’s work focused on proteins that function as “brakes” in the human immune system, slowing down immune responses. By blocking those brakes, they realized they could unleash the human immune system to fight cancer. 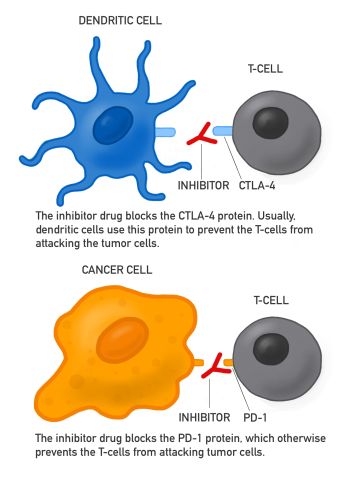 Egen describes the human immune system as a collection of diverse cell types working in concert to protect the body from pathogens, such as bacteria and viruses. One group of cells consists of “innate immune cells,” such as macrophages and neutrophils, while another group consists of “adaptive immune cells” that include T cells and B cells. Innate immune cells function as the body’s first line of defense, ingesting and killing pathogens. They also are able to alert T cells of a potential infection. T cells are master regulators that can go on to orchestrate a complex immune response. This response can include activating B cells to produce antibodies that bind to and neutralize pathogens. Involvement of the entire immune system is ultimately required to keep people healthy.

For cancer immunotherapy, scientists target the same set of cells in the body that normally fight pathogens to instead attack cancer cells. “We are trying to promote immune cells, and particularly T cells, to find and ultimately kill cancer cells using very similar mechanisms and  machinery that they use during a viral response,” says Egen, who works on immunotherapies in Amgen’s discovery research department.

Allison’s and Honjo’s work in identifying different proteins — both of which serve as brakes for immune responses — have enabled new types of immunotherapy.  By taking off the brakes on immune responses, these therapies were designed to make immune cells more effectively target tumors.

“It’s an amazing time in field of immunotherapy,” Egen says. “There has been an explosion of new therapies being tested in the clinic with hundreds of different therapeutic approaches.”

In his own work at Amgen, Egen works with a team of researchers to identify interesting therapeutic targets for fighting cancer. “We start with a hypothesis around a biological pathway that we think could regulate the immune system and then work with colleagues across many departments to test that hypothesis,” Egen explains. Encouraging results could lead to development of small molecule inhibitors or antibodies for potential therapies. Egen and his colleagues then stay connected to the research once those therapies move to the clinic by providing biology expertise. “The opportunity to develop a therapy that could someday help treat a life-threatening disease is incredibly motivating,” Egen says.

As immunotherapy continues to grow, there is continued demand for biologists, and particularly immunologists, but also for people with data science skills, Egen says. Technology is constantly advancing, and the biological sciences are producing enormous amounts of data that require people who can understand and analyze multidimensional datasets to generate insights to help move the field forward.

The dream for Egen is to successfully bring immunotherapy to larger patient populations with more lasting curative effects. While some immunotherapies are now extending patients’ lives by significant amounts of time and with better quality of life than traditional treatments, there are still large numbers of patients who do not respond at all or whose responses are short-lived. “Science acts in small steps, with potentially big bursts along the way,” Egen says. “And the idea is to figure out the right combination of current and new ideas to drive responses that will keep more people healthier for longer.”

View the Resource - Immunotherapy: The Cancer Treatment of The Future?