Although 2020 was filled with tremendous global challenges, it also reminded us all of the crucial role scientists play in public health and safety. The year brought biotechnology in particular into focus: New vaccines to fight the COVID-19 pandemic, as well as new diagnostics, were only possible thanks to tremendous growth in biotech tools. Now, as we ring in 2021, it is a good time to reflect on a cutting-edge technology that received global recognition in 2020—the CRISPR/Cas9 tool—and the pioneering scientists who won the Nobel Prize in Chemistry for its development, Emmanuelle Charpentier (below left) and Jennifer Doudna (below right).

Called “genetic scissors” and developed about a decade ago, the CRISPR/Cas9 tool enables precise genome editing. Writing of the achievement in a press release, the Nobel Foundation said:

“Using these, researchers can change the DNA of animals, plants and microorganisms with extremely high precision. This technology has had a revolutionary impact on the life sciences, is contributing to new cancer therapies and may make the dream of curing inherited diseases come true.”

Like many discoveries in science, the CRISPR/Cas9 tool sprung initially from basic research to understand foundational systems. In this case, Charpentier, a microbiologist at the Max Planck Unit for the Science of Pathogens in Berlin, was researching the bacteria Streptococcus pyogenes, a dangerous pathogen to humans. Her work uncovered a protein called tracrRNA, which is part of an ancient (billions of years old) microbial immune system called CRISPR that prevents infection by viruses by cutting out their DNA with specialized enzymes. (CRISPR is short for “clustered regularly interspaced short palindromic repeats” and was named by microbiologist Francisco Mojica of the University of Alicante in Spain.)

Previous work had identified some of the enzymes that are part of this immune system, including CRISPR-associated proteins (Cas) such as Cas9. After publishing about the tracrRNA in 2011, Charpentier collaborated with Jennifer Doudna, a biochemist at the University of California, Berkeley, to see if they could take advantage of the bacteria’s natural defense system to create a genome editing tool. In 2012, they recreated the bacteria’s genetic scissors in a test tube, demonstrating that they could program the scissors to cut any DNA molecule at a specific site—and thus the CRISPR/Cas9 tool was born.

Around the same time, other scientists were also working on the CRISPR system, including biochemist Virginijus Šikšnys of Vilnius University in Lithuania, bioengineer Feng Zhang of MIT, and biochemist Dana Carroll of the University of Utah in Salt Lake City. Science is a collaborative effort built on the contributions of many.

The tool consists of a “guide RNA” and the DNA-cutting enzyme Cas9 (though in some cases other enzymes are used). The guide RNA is designed to mirror the DNA of the gene they want to edit, essentially a copy of the genetic sequence. The guide then leads Cas9 to the target where it can cut the DNA to make the desired modifications. 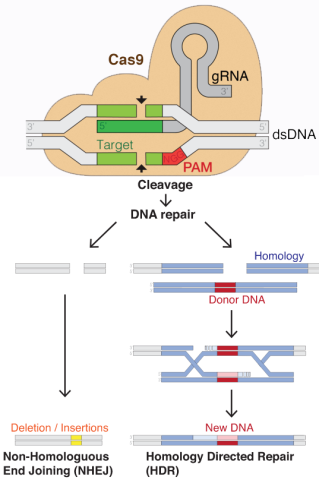 In the documentary film “Human Nature,” Zhang compares the tool to how a cursor in a word processor can make a breaking point for additions or subtractions to text. “In DNA, wherever you make the cut is the equivalent of a cursor in this word processor of the genome. That’s where you can type in a new word,” he said, or delete one. Researchers refer to deletions of genomic material as “knock-outs” and additions as “knock-ins.”

The uses of the CRISPR/Cas9 tool are diverse, as it can be customized for a variety of applications. Compared with past genome editing tools, it is easy to use. “Before, only a handful of labs in the world could make the proper tools [for gene editing]. Now, even a high school student can make a change in a complex genome” using CRISPR, Dr. Alejandro Chavez, an assistant professor at Columbia University who has developed several novel CRISPR tools, told the National Cancer Institute.

The Nobel Prize winning technology has most immediately changed the fields of agriculture and medicine. Researchers have been able to edit the genomes of crops to make them resistant to drought, mold, and pests. Several clinical trials are underway using the CRISPR/Cas9 tool, including one in 2019 at the University of Pennsylvania that uses the tool to remove three genes from cancer-killing immune cells to make them more effective. The tool is even contributing to the fights against COVID-19, with rapid, saliva-based tests being developed that use the CRISPR/Cas9 tool to isolate and cut out a coronavirus protein for diagnosis.

The Amgen Biotech Experience (ABE) Program Officee suggests the following resources for high school students to learn about and use the CRISPR/Cas9 tool: