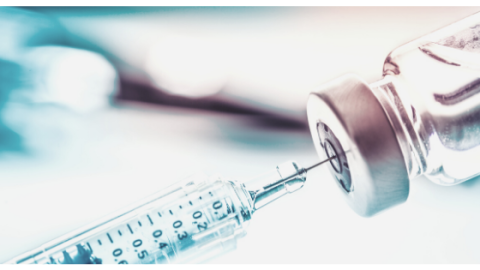 The novel coronavirus 2019 (COVID-19) that has created a global pandemic is challenging public health and scientific systems worldwide. Many promising efforts are underway to develop a vaccine to prevent the disease in the future. Vaccines can effectively teach the immune system to recognize and combat pathogens; however, they often take years to develop. The good news is that the same unique shape of the virus that enables it to so easily infect human cells—the spikes that surround the virus and give it a crown-like appearance—is giving researchers a head start in vaccine development.

Why Do These Spikes Matter? 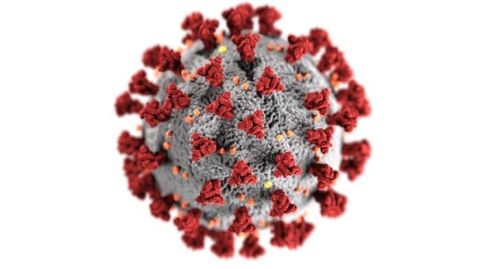 You have probably seen images of COVID-19 like the one at right that show a fuzzball covered in spikes in vibrant colors. The colors are not what you would see if you looked at the virus up close—the colors have been added by graphic artists to help people see the virus’s structure. In the image above, the gray sphere surrounds the center of the virus, where its genetic material is stored. The orange and yellow bits are different types of proteins that direct the virus in various ways. And most important for understanding the new vaccine study, the spikes shown in red are a type of protein that allows the virus to attach to and enter human cells, where it ultimately replicates, making a person sick.

These spikes are how the virus has been so contagious and spread so quickly. The crown-like halo of the spikes gives them their name (corona is the Latin word for crown); all coronaviruses have them. The scientists who named the virus type in 1968 thought that it resembled a solar corona, the bright crown-like ring of gasses surrounding the sun that you see during a solar eclipse. COVID-19 is a new type of coronavirus, but scientists have been studying other types of coronaviruses for decades, including the coronavirus that caused the SARS (Severe Acute Respiratory Syndrome) outbreak in the early 2000s and another that caused MERS (Middle East Respiratory Syndrome), which was first seen in 2012.

Having prior experience studying coronaviruses, researchers were able to fast-track a plan to create a vaccine that instructs human cells to create spiky proteins like those in the virus in order to train our immune systems to recognize and attack the proteins in COVID-19. Had COVID-19 been another type of virus that was unknown to them, researchers likely would have needed many more months or even years of research and development before having a vaccine ready to test in human trials. 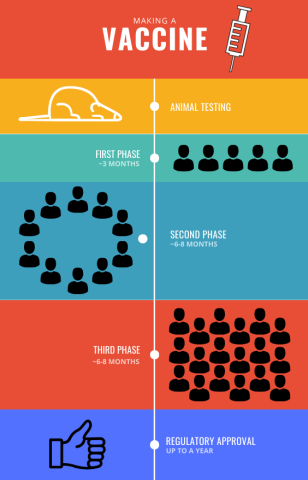 Vaccine development has several steps before getting government approval: it starts with evaluating the genetic material and structure of the virus, then testing in animals until a viable vaccine is identified, and then three phases of testing in humans to show it is safe and works as intended. Only when the vaccine successfully completes all of these phases can it be approved by a regulatory agency. Because of the speed at which COVID-19 was identified and how quickly scientists globally have sequenced its genetics—combined with it being from a known family of coronaviruses, as explained above—the process has jump-started right into human testing in what are called clinical trials.

The National Institute of Allergy and Infectious Diseases (NIAID), part of the National Institutes of Health, is funding the first trial, which is taking place in Seattle Washington. The vaccine, developed by scientists at the biotech company Moderna Therapeutics, is a novel approach to match the novel nature of the virus. Remember those spikes?

Well, researchers are engineering a special kind of genetic material called messenger RNA (mRNA). All of us have mRNA, which carries the genetic information contained in the DNA of a cell’s nucleus out into the cytoplasm of the cell where proteins are made based on the information. Think of it like a person carrying a copy of a recipe from the executive chef to the kitchen where the recipe is made.

In the vaccine being tested in Seattle, researchers created synthetic mRNA sequences that code for the coronavirus’s spike protein. When injected into a person, the mRNA causes the person’s cells to manufacture spike proteins. The idea is that once the human body learns to recognize these spike doppelgangers, when infected, it will be able to recognize the live coronavirus particles as foreign and attack and kill them.

In general, our bodies fight infection by attacking what they see as foreign invaders. Our immune systems learn how to recognize dangerous viruses and bacteria over time. Most vaccines work by introducing the virus itself into our bodies through an injection, either in part or as a whole in a very weak or inactive state. This allows our immune systems to learn to recognize the virus and create the right type of cells to fight it. With this new vaccine being tested for COVID-19, the synthetic mRNA will trick the body into producing its own virus-like proteins to train the immune system to attack the virus.

In the first phase of the human testing, researchers are testing 45 healthy adults. Each participant will receive two shots, 2 weeks apart. They are also testing different dose levels. The goal of the first phase is to make sure that the vaccine is safe and that it enables the human immune system to create the right type of cells to fight COVID-19—specialized immune proteins called antibodies.

If the vaccine proves safe and effective in the first phase, it will move to a second phase with more participants. Moderna is working with the U.S. regulatory agency, the FDA, to speed up the process, but it will still be several months to a year before the human testing is completed. Overall, that process usually takes about 18 months from the time the vaccine is developed to when it gets approval, assuming that it proves safe and effective.

While NIAID continues with this trial in Seattle, researchers in other parts of the world are exploring other vaccine approaches and various antiviral medications to treat people with the disease. Although the pandemic news may seem grim, the good news is that the global scientific community—including biotech companies, academic researchers, and government agencies—are working full-steam ahead to find novel solutions to this novel virus.

Other Recent Resources from the Program Office